Form vs Substance in politics

#22
Jon said:
Just a quick rebuttal for the economic charts in the earlier post.
Click to expand...
I'm glad we're both using the same source.

GDP
If you show the GDP as an absolute figure, whichever administration is in charge at the present time will look like they are doing a good job. This is because the US economy has been by and large on an uptrend since they started measuring it (again, the two visible exceptions are 2008 global financial crisis and Covid-19). 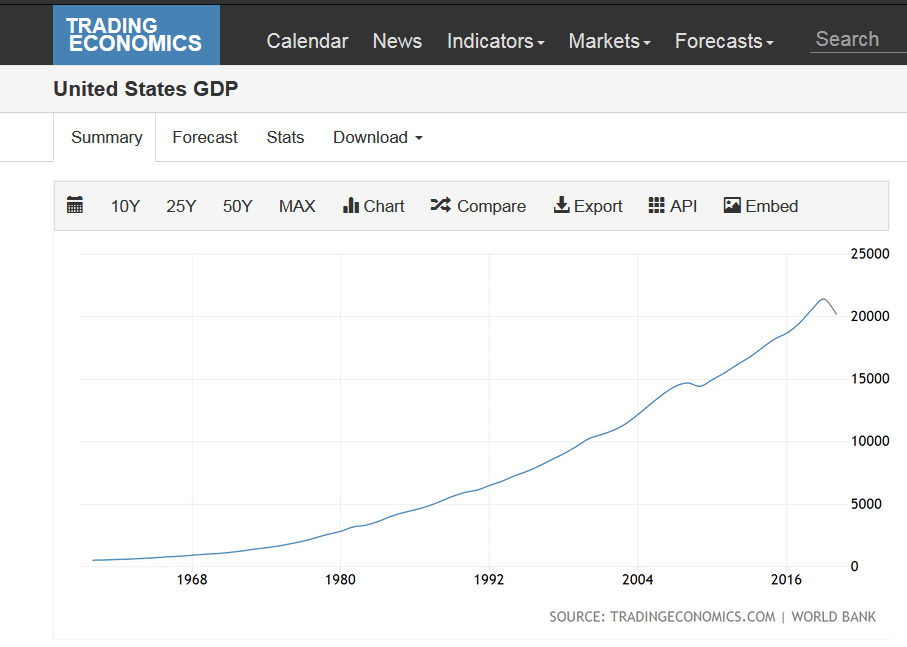 This is why you want to look at the GDP growth rate, i.e. the speed at which GDP grows over a period of time. 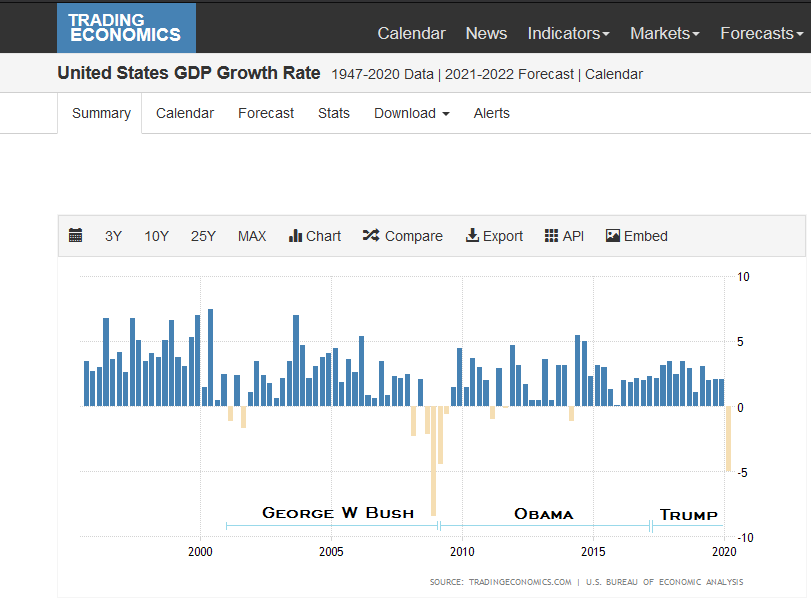 If you look at the chart above, I've started measuring again since Bush was in power. We talked about the two major down spikes.

I still fail to see Trump's economic miracle. In terms of consistent growth, it would seem, among the three presidents, that Bush perhaps had the best growth rate overall (let's discount the 2008 global crisis, although that should really be part of a separate conversation). 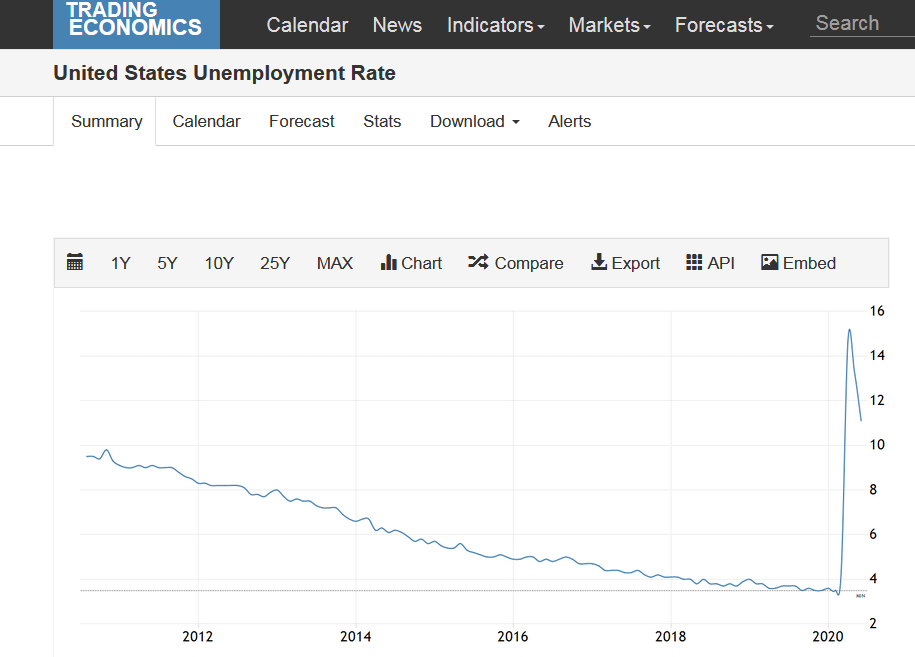 Fully understanding that you can't have 0 unemployment rate, it would be good to see some hard facts as to exactly what policies Trump enacted that enabled him to continue the unemployment rate downslope trend.
F

Staff member
#24
I am a source, but if you can prefer, call me an intermediary.

Ok, take the WHO. They said no to masks. Now they have modified that view. Take Fauci. He said masks are ineffective. Now he has changed his tune. I've been banging on about masks in my other forum for months. I said how can you say they are ineffective yet say we need to keep them for the medics? Either they work or they don't.

Staff member
#25
Fully understanding that you can't have 0 unemployment rate, it would be good to see some hard facts as to exactly what policies Trump enacted that enabled him to continue the unemployment rate downslope trend.
Click to expand...
I know you intensely dislike Trump, so I am altering the names to help you see clearly.

Let us take one fact. What impact do you think slashing corporation tax has? Obama cut it from 35% to 21%, a dramatic altering of the corporate landscape. Is that likely to help companies grow or hinder them? What impact would that have on unemployment?

#26
Jon said:
Just ignore for now the considerable improvements on tariffs Obama negotiated, which also helped US businesses.
Click to expand...
Oh wow, Obama did that? Then it must be good!

Seriously, this is not a partisan issue for me. You might as well swap Trump with Pence. I do dislike Trump but I like Pence. I don't think Trump is a patriot, but I do think Pence is.
F

#27
Jon said:
Take Fauci. He said masks are ineffective. Now he has changed his tune.
Click to expand...
So I just googled "fauci don't wear mask" and I've found these two links

What I see here is that he was protecting healthcare workers, and this is what I seem to remember as well.


Can you point me to a specific video where Fauci himself says "masks are ineffective"?

Staff member
#28
Seriously, this is not a partisan issue for me. You might as well swap Trump with Pence. I do dislike Trump but I like Pence. I don't think Trump is a patriot, but I do think Pence is.
Click to expand...
I disagree with your last sentence. But I agree with you on the part about liking Pence. I thought he seemed very dignified the first time I saw him speak. In a way, he has a similar kind of smooth respectful delivery that Obama had.
Last edited: Jul 29, 2020

Staff member
#29
Joking aside about the name switches, did my comments on the corporate taxation rate get you to re-evaluate your view at all?
F

#30
Jon said:
Joking aside about the name switches, did my comments on the corporate taxation rate get you to re-evaluate your view at all?
Click to expand...
When I have more time I will comment on the broader typical Democratic Vs Republican approach to the US economy, but reading the Wikipedia entry on Tax Cuts and Jobs Act of 2017 this stands out for me:

Staff member
#31
I am a little confused by the above post. We were talking about a causation of lower unemployment due to the cut in corporation tax rate, yet the above is about averages projected over a 10 year period. You can say that a 10 year average projection is not a higher annual growth rate, but we are not talking about 10 years. In addition, no one can predict 10 years. All the experts in the world did not predict the various global crashes. Experts on the stockmarket average the index.

Best way to reflect on this is to ask yourself a simple question. If you ran a business and you had doubled your profits overnight due to a tax rate change, do you think you are able to hire more people and grow faster?
T

#32
Part of what Trump did is relax certain business regulations, independent of tax rates. Regulations cost money to,... well... regulate. The time it takes to comply AND CERTIFY COMPLIANCE to onerous regulations is reflected in the salaries of people who have to police those regulations. DJT killed as many really burdensome regulations as he could. I fully agree with anyone who says he is abrasive. He's not a politician. He cuts to the chase and doesn't seem to care much about political correctness. (Neither do I, to be honest.)

Conventional wisdom when I was younger was that at just under 5% unemployment, we were fully employed. Trump's policy changes drove that number under 4%. When you have people working and making money rather than living "on the dole" as our UK friends would call it, you have less drag on the economy. Trump knows that. Maybe not all jobs were excellent. But jobs that take a person off the welfare or unemployment rolls is better than no jobs at all.
F

#33
Jon said:
I am a little confused by the above post. We were talking about a causation of lower unemployment due to the cut in corporation tax rate
Click to expand...
I thought yours was a general question about whether Trump's tax cuts were good overall.

In that Wikipedia page I cited earlier I could not find any direct link between those cuts and employment/unemployment.

Having said that, I will say that in general, any tax cut to business carries the expectation that businesses will hire more, so in my view the two things have a correlation in principle.

There's a really succint diagram about this:

So, going back to Trump, while I am not discounting what he may have done with the tax cuts, I am still not persuaded that he has ignited this economic miracle you spoke of. In my view he has done no more no less than what any other conservative government would do, which brings us to the really important question: who is right? Democrats or Conservatives?

My own view is that there is no simple answer. Just a look at the GDP growth since the beginning will tell us that there is no overwhelming impact of one ideology over the other: growth will take place despite of who is in power. Too much regulations or bureaucracy and most businesses will be stifled. Not enough regulation and you get yourself another 2008 global crisis. Tax too much and employment goes down. Tax too little and federal jobs get cut, so employment goes down anyway.

These are gross simplifications of course, but the point is, I do not see any earth shattering changes that Trump may have contributed to. Ironically, neither did I with Obama, although with him expectations were much higher. Obama set himself up to "change the world". He did not change much.

So, going back to your original question: I think Trump has some substance because his ability to negotiate served him well in some occasions. He definitely has zero style and is no statesman. Has he been a disruptor? Yes. Do all disruptors bring positive change? No. Do I think that politics should be left to experienced politicians? Absolutely.

Staff member
#34
Company A, high tax environment, virtually no profit, struggles to survive and strong possibility of going out of business. Company B, low tax environment, great profits, can survive and grow. It can't get simpler than that. If it isn't that obvious, imagine this. You have X income and want a cleaner. But you have virtually no disposable income after paying your bills. Can you afford to hire the cleaner? No. New government comes in, they slash your tax rate. Now you do have that disposable income, you hire the cleaner, you have reduced the unemployment rate by 1 person.

I think it is very hard to argue that cutting the taxes by a significant amount does not lower unemployment.

I am still not persuaded that he has ignited this economic miracle you spoke of. In my view he has done no more no less than what any other conservative government would do
Click to expand...
I think you have an error in reasoning here. If he has done what any conservative government has done, and provides strong economic growth and low unemployment, it does not mean he has not done it. And you also cannot ignore the fact he has broken unemployment records.

Trump is a master negotiator, look at what he has done with tariffs to help business. Trumps skill is a deal maker, look at his books for that, like The Art of the Deal!

I like the graphic you posted. I love pictorial representations of stuff.

He does have style, but a style you dislike. He is not bland. If you mean stylish, then I agree with you on that one.

Experienced politicians can just be those who are corrupt and learn how to lie. Part of the reason Trump was elected was because I think people were fed up with promises, and just wanted someone who speaks a little more plainly. Perhaps they got more than they bargained for.
F

#35
Jon said:
If you mean stylish, then I agree with you on that one.
Click to expand...
Come on, Jon, now you're just trolling

Staff member
#36
What I like about the discussions you bring here is that although we disagree on some things, perhaps mostly just politics, I can at least have a rational debate with you. Most debates are not rational at all, in my view.

Regarding tolling, on my other forum we had a super-troll. His skills were elite and he spent years winding up the members. It causes all sorts of hoo-hah. I've never met someone who sucked up so much attention. He was very Trumpesk in a way. I'm sure @The_Doc_Man can attest to that.
F

Staff member
#38
I actually don't disagree with you! I think he is highly skilled at winding up the other side and getting them to overact, only to have them overreach and make themselves look silly.
You must log in or register to reply here.
Share: Facebook Twitter Google+ Reddit Pinterest Tumblr WhatsApp Email Link
Top