Does argument entrench or shift perspective?

#21
If he can, that merely strengthens my gas analogy.

Well, look at the European elections. Nigel Farage is on 30%, Labour 22%, Conservative 13%. Something like that anyway.

#23
Nooooo. European elections don't use a FPTP system. It's like adding shoe sizes together. Nonsense.

Staff member
#24
They have still voted down brexit lines. The Brexit Party is only a few weeks old but they hold the majority of the votes. How do you account for that?

#25
Just seen this question and answer from the following linked article:

"So what does neuroscience tell us about how you might go about changing someone’s mind or winning an argument?
It’s very difficult. Once you have built up a perception of the world, you will ignore any information to the contrary. Your brain is already taking up about 20% of your energy, so changing the way that you think is going to be quite cognitively costly. And it might be quite socially costly too. "

Staff member
#26
It talks of how the brains of black cab drivers changed after studying for the exam about navigating London's roads. I wonder how their brains changed when Uber started offering a cheaper service, outnumbering them nearly 3 to 1?

I quite like some of the topics discussed in The Guardian. It is unfortunate that nearly all of them start going off in a political way. It seems like life and politics cannot be separated. Perhaps life IS politics. I'm sure the same applies to the other papers too. It is just harder to notice when your ideology is in alignment with the writer.

The cognitive cost statement is a bit misleading, in my picky, distorted, pedantic and fussy view. If you perpetually batter your head against a brick wall where reality and your perception of reality do not match, is that not a case of never-ending resistance and friction? I think it is more accurate to say that the immediate cognitive cost is high, while the long-term cognitive cost of understanding reality is low.

#27
I agree with you on the short term vs long term costs. Perhaps that was too much detail to go into in an interview.

I like articles in the Torygraph - sorry, Telegraph. Good journalism is a delight, whatever the political slant. I also think it's impossible to segregate politics from life. "The person is political" was a slogan used during 2nd wave feminism in the 60s and 70s - but it applies to everyone.

It bothers me when people say they are not political, or not interested in politics. In many cases they mean they are either disinfranchised or uninterested in party politics or central government. But those same people send their children to school, use public transport or the road systems, have their waste & recycling collected, eat takeout from reputable outlets, swim in pools which are clean and safe (I could go on and on and on about this) etc. None of which would be possible without politics in some form.

I'm tempted to read the book. I wonder if I can get it as an audiobook... I've been using them in the car on the way up and down to Milton Keynes. So far, I've had Michelle Obama for company. What a woman. I'm currently hearing from Adam Kay - Confessions of a Junior Doctor - which is both funny and shocking at the same time.

#29
Jon said:
[Edit: If you say I am wrong, I won't believe you anyway since I will entrench my position. Those are the rules!]
Click to expand... 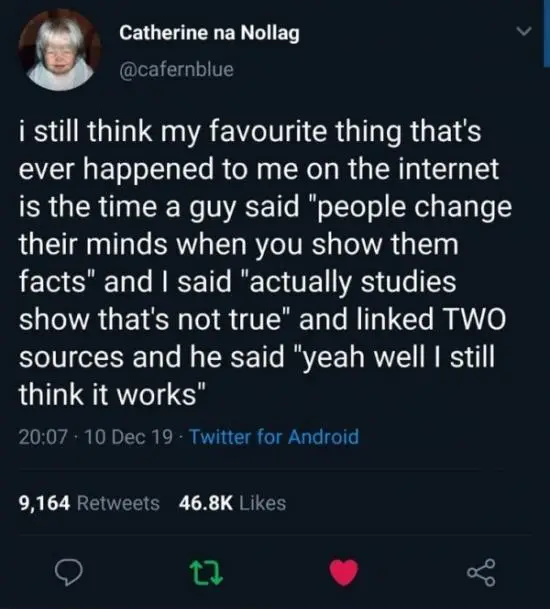 Staff member
#30
I think it depends on what it is. When it comes to politics, it is much harder to shift perspective, because many of the underlying causes are based on values, and some of these can be influenced by your own personality. Personality has both environmental but also a heavy genetic influence too. So to a degree, our political beliefs can be hard wired.

But if you said the earth is flat and I took you up in a hot air balloon high enough to prove otherwise, then the argument might be resolved. We would both have probably asphyxiated and frozen to death in the process though.
F

I don't mean manipulated - I mean open to the possibility that a different point of view is worthy of consideration.

Staff member
#32
I agree. And I think that propensity is heavily determined by personality. For example, there is a personality trait called Flexibility. This reflects on stubbornness or cooperation. You can read about the trait here: https://hexaco.org/scaledescriptions

Staff member
#34
Yes, and I highly recommend it.
F

#35
I strongly believe that when there is strong communication and a desire to get to the bottom of the truth from people who have opposing views, it is possible to come to a better understanding.

I will elaborate in the next few days about this.
F

#36
@Jon let's have a scenario where person A and person B are two reasonable individuals who disagree on topics X, Y and Z

Should A and B be exposed to this data?

Staff member
#37
That reads like a scientific experiment, and in such domains the exposure is less of a "should", more of a "must." Yet in the messy value and opinion based larger society, things are less clear cut. And people are not reasonable. Even those trying to be reasonable are not reasonable, since they are led by their emotions to a large degree. There are many forces at play.

So, while I agree with your logic in a narrow sense, I believe that in the bigger picture, exposure to data does not necessarily shift perspective. Take the Trump unemployment argument and economy as an example.

I used to have the same view as you. As I have gotten older, I've modified my stance. Over the years, I've been exposed to new data that suggested my old perspective was off-balance. See what I did there? I am now in full agreement with you.
F

#38
I agree that my prior post sounds more like a thought experiment. I also agree that things are less clear cut in the real world.

For example, in the real world there are undoubtedly many pitfalls that two reasonable people debating would have to watch out for.

But my point is, in order to get a better undestanding of each other's differences, one needs to start somewhere, doesn't he?

Staff member
#39
If someone doesn't understand each others differences, then starting somewhere might be a good thing. I think many people do understand the differences, but they just fundamentally disagree.

For example, I do understand the left-wing perspective, but I just cannot understand why they think that way! To me, it seems irrational. And they probably think the same way about my views.

I can see your desire to bring together understanding. At least that appears to be your conscious objective. However, maybe you have a subconscious objective to convert the "misunderstandings" of the other side, so they conform to your view. Before you dismiss this, just reflect on that for a while.
F